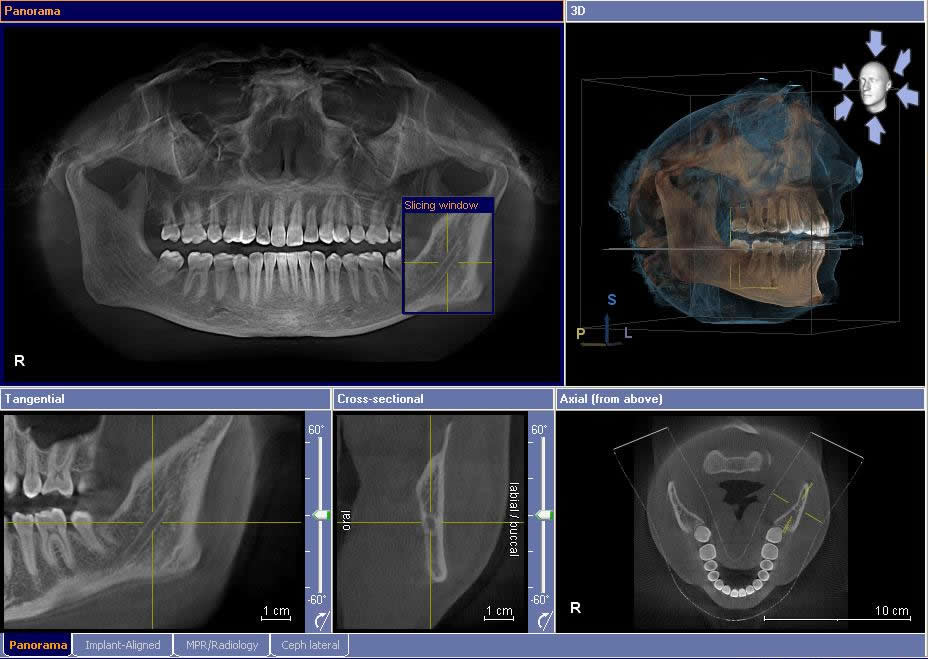 What Is Newtom 3D Imaging And What’s It Used For?

We’re big believers in investing in technology that will ensure you have comfortable visit while reaching your oral health goals.
Cone beam 3D imaging is a relatively new development that allows dentists to see clear, detailed, three dimensional images of your teeth, as well as the bones and soft tissues that surround them. It’s called a cone-beam because the x-ray beam is literally in the shape of a cone, where traditional CT scans use fan shaped x-ray beams. This cone-shaped beam takes nearly 600 of “slices” of information about your mouth, and then special software assembles all of this into three-dimensional views.
These kinds of images can be a lot more helpful than traditional two-dimensional x-rays, since they can be moved around to see your tooth and bone structures from every angle. This technology is particularly helpful for things like seeing exactly how close a wisdom tooth is to the nerves and arteries in your jaw, or precisely how much bone is present to support an implant. We might want to take a 3D image for some of the following reasons:

Not everyone who sees us will need a Cone Beam 3D image, and they are not a substitution for traditional two dimensional x-rays. We’ll only use this kind of imaging when it is a diagnostic tool that’s medically necessary. We’re especially careful to ensure minimal exposure to radiation, since we know radiation exposure is a concern for some people. The exact amount of radiation emitted by a Cone Beam scan depends on exactly what we’re taking an image of, but a 2013 study by the Journal of Imaging Science in Dentistry determined that the radiation from the kind of machine we use (a Newtom 3D) is between 28µSv and 122µSv for a an image that captures must, not all, of your facial structure. According to the United States Nuclear Regulatory Committee, the background radiation dose just from being alive in the US is on average 8µSv per day. Using these figures, we can assume that a Cone Beam Scan is generally going to be the equivalent of between about 3 and about 16 days of background radiation. A traditional brain CT scan emits more like 2,000 µSv, which is closer to 2 years of background radiation. We run daily and weekly checks to the Cone Beam machine to ensure that it’s in tip-top shape.

Getting a Cone Beam 3D image taken is easy and takes less than a minute – total! There’s no discomfort or special preparation, we’ll just ask that you take off any metal jewelry like earrings to make sure we get the best image possible. The machine does all the work for you, rotating around 360 degrees to capture all the angles.

You should be aware that our dentists are looking at the image for specific information to help them plan the best treatment for you. If you’d like a licensed radiologist to read your scan to look for any other signs of disease, we’re happy to offer that for a small additional fee of exactly what the radiologist charges us.